Born & bred on the doorstep of Noosa National Park & its famed surfing points, Josh grew up eating sand and playing on the shore as his dad Ben surfed. By the time he was walking, he was out in the lineup with his old man. When he was 10 he was competing in local junior boardriders events. As a teenager he began doing the rounds of the Junior Shortboard Series. Soon after first picking up a longboard he began to juggle competing in shortboard & longboard events.

Josh began competing professionally at a young age of 15 on the Australian Professional Longboard Circuit, with amazing results. In only his first year he qualified to represent Australia, at the Oxbow World Longboard Championships, in Hawaii.

By 2006, Josh had cemented his dominance in the world stage of competitive longboarding. He made history by winning the ASP World Longboard Title. He was named by Longboard Magazine in the US, as one of the most influential surfers of the past 15 years.

Josh, also made history by winning the first ever Australian Stand Up Paddle Title in 2009, only highlighting his ability to excel in all kinds of watercraft.
He has been nominated 6 times as Sports Star of the Year, which Josh claimed in 2006. Then in 2015 he was inducted into the Sunshine Coast Sports Hall of Fame. 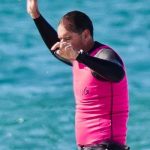